A long time ago, a fool was invited to a neighbor's house to share a meal. Once the food was served, the fool was displeased because he found the food bland. His neighbor noticed this and immediately sought to remedy the situation by offering the fool some salt. After the fool sprinkled some salt on his food and took a bite, he said to himself, 'The salt has really made the food quite tasty. If such a small amount of salt has had such an effect, just imagine what a lot of salt will do!'

To his neighbor's astonishment, the fool pushed his meal to the side and began to eat the salt by itself. Of course, it wasn't long at all before the foolish man had burned his mouth, and instead of being delighted he groaned in pain.
---from "A Flock of Fools," a translation by Kazuaki Tanahashi and Peter Levitt of "The One Hundred Parable Sutra"

The "morale" of this story given in the book by Tanahashi and Levitt is simply "A person who misconstrues the Way of Understanding* is just like this fool. He hears that by eating and drinking less, the Way may be gained, and so he fasts for seven or even fifteen days. He ends up starving himself in vain and realizes nothing of the Way. Consider carefully and you'll find it is so."

That may be so, but I think there are so many other lessons we can take from this parable. First, we've all heard that sometimes 'less is more' and that it's possible to have 'too much of a good thing.' In fact, we have heard this so many times it's become a cliche and yet we find ourselves often falling into the trap of believing that if a little is good, much more will be better! Hell, it's pretty much the basis of capitalist greed.

Speaking with a friend about this parable yesterday, she remarked on how it can also be seen as what can happen when we cling to some object and fail to see dependent origination: the food alone was bland. When salt was added to the food, the food became tasty. The tastiness arose dependently upon the small amount of salt added to the food, but the fool fixates on the salt and fails to see this. And this failure of understanding is also related to our failure to discern actual causes and conditions that lead to specific experiences, and thus causes us to focus on the wrong things.

*The capitalization of terms such as Way and Understanding is in the original. I shy away from such capitalization as it tends to idealize and reify such terms. 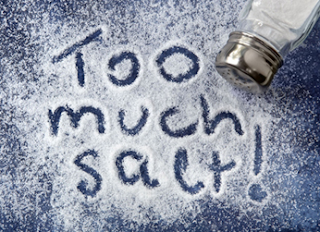 Yoking The Mind IS Yoga....

This mind is like a fish out of water that thrashes and throws itself about, its thoughts following each of its cravings. Such a mind is unsteady, attracted here, there, and everywhere. How good to contain it and know the happiness of freedom.

Yet, how unruly still; how subtle the delusion of the haphazard thoughts. To calm them is the true way of happiness.

Putting a bridle on the wandering mind, single-mindedly the practitioner restrains her thoughts. She contains their darting waywardness and finds peace.
---Dhammapada

With the fetishization and hyper-valuation of asana (the postural practice of yoga) in the contemporary “yoga community” it seems many, if not most, practitioners haven’t been told that the original meaning of yoga; the original practice of yoga was meditation, often described as a bridling or yoking of the mind. In fact, the word yoke is a cognate of the Sanskrit yoga, both tracing back to the Proto-Indo-European word yeug meaning “join.”

Now there have been many yoga practitioners who have taken this teaching about yoking the mind to go as far as saying that the best outcome would be to stop all thinking. In fact, many have translated the second aphorism of The Yoga-Sutra in just this way: “Yoga is the cessation of the fluctuations of consciousness.” Even many buddhist yogis see deep states of non-conitive samadhi as some kind of end-goal and this has led to a pernicious anti-intellectualism in much popular, contemporary Buddhism and yoga.

However, intellectual rigor, study, and debate were always part of the various yoga traditions and it may be helpful to remember that “right thinking” is, after-all, the second of the eight limbs of the noble eightfold path of yoga practice taught by the Buddha.

We can take this teaching from the Dhammapada as pointing out that most of the thoughts that arise throughout our day are indeed of a scattered, wasteful, conditioned pattern of a mostly not very useful nature. Through meditation, in particular satipatthana or mindfulness-meditation, we can become more intimately familiar with our thinking so that we can contain the wasteful thinking in order to create a more stable and calm mind with which thinking can become more directed, skillful and creative.

It’s not too farfetched to say that the world is in the shape it is because very few ever get a chance to actually stop and investigate the nature of the mind. And so, people are mastered by their thoughts instead of them mastering their thoughts. The first important step in containing the mind is to first take an honest look at the mind that is unrestrained and untrained. When we take the time to do this, we can begin to see how much of the thinking that goes on causes us – and those around us – so much suffering. Training the mind, we can begin to create the peace in the world we say we seek.

All we need is to begin. Sit down comfortably in a suitable space where you won't be interrupted and just rest your attention on your breath. Soon enough, the mind will wander. Gently, free of adding any agitation or self-criticism, bring your attention back to your breath. And do this every time you mind wanders. Seeing how much the mind wanders is the first insight. Later, you can begin an inquiry into what kinds of things your mind wanders to. And all the while, each time you gently guide your attention back to the breath, you are cultivating the yoking skill of concentration.