The "Dim-Witted Monk" and Yoga Practice

One day, a bright and intelligent student of the Buddha asked if he could bring his younger brother into the sangha. Delighted, the Buddha said, “Of course!”

The younger brother, however, although kind and gentle, was a bit slow and “dim-witted.” He just could not understand any of his studies and asked to go home so that he wouldn’t waste the buddha’s time or let down his brother.

“There’s no need for you to give up” said the Buddha. “You needn’t abandon your working toward liberation just because you seem to yourself to be slow-witted. You can drop all the philosophy you’ve been given to study and simply repeat this mantra that I give you.” So the Buddha gave the younger brother a mantra and sent him off with encouragement to practice.

But soon the monk was back, this time feeling even more humiliated. “My beloved teacher, I can not remember the mantra you gave me and so I cannot practice as instructed.”

The Buddha kindly and patiently repeated it for him, but twice more the monk came back having forgotten it each time. So the Buddha gave him a simplified variation but when this too slipped completely out of his mind, the young monk could hardly dare to visit the Buddha again.

“There’s an even shorter version,” the Buddha said, smiling. “It’s only two syllables. See if you can keep this in your mind.”

But… he could not. Alone in his hut, the young monk broke down and wept. His older brother found him in this state and was furious, feeling that his own reputation would now be sullied because of the failure of his brother. He told the young monk to leave the sangha and return home, and so the boy left and sadly made his way along the path to the village.

As he made his way through a grove of trees, he met the Buddha practicing walking meditation. The Buddha smiled and took his hand. Together they walked to a nearby temple where two old monks were sweeping the floor. The Buddha said to them, “This young monk will live here with you. Continue sweeping, and as your brooms move back and forth, say the two-syllable mantra that I will give you now. Keep at this till I return.”

The young monk sat down and listened to the movement of the brooms to and fro over the stone floor. He heard the whispered rhythm of the mantra as it was repeated over and over again. This went on for quite a few weeks, and before the Buddha returned, the young monk had found complete liberation, and so had the two old monks.

There are a few reasons I am fond of this story from the Pali Canon. The first is that it shows both the patience of the Buddha and his compassion and willingness to work at finding something accessible for this ‘dim-witted’ student to practice. I think there is a fairly sizable demographic of yogis whose animosity to what they see as the watering-down of yoga to make it accessible is a form of purist elitism that fails to look at the motivation of those who are creating new twists and formats.

Now, I too find myself wincing when I find posts about things like “Yoga With Goats,” which I am sure some reading this probably find lovely and fun. And what do I know, maybe even liberating! And, while "Nude Yoga" doesn't sound like my bag, I've talked to people who teach and practice it and see a true and dedicated motivation in alignment with yogic values of transcendence.  After all, self-transcendence or liberation is the whole raison d'être of yoga practice. (Putting aside for the moment the fact that liberation itself has been variously and often mutually exclusively conceptualized across yogic history, lineages, and philosophies).

But still, the point I’m wanting to make is that I find inspiration in the fact that the Buddha was willing to take so much time, without any hint of losing patience with this student until he found a practice that worked for this individual – and apparently the other two elderly monks!

And that’s the second point: I’ve read recently some articles that wish to nail down what yoga is and even what asana is to a very narrow and ultimately sectarian definition, claiming that any postures that are not seated meditation postures should not be called asana! Balderdash! Hatha-yogasana are asanas. They are not preliminary postures preceding ‘real’ asana.

Or… more specifically, they needn’t be seen as such. A ‘stable, easeful’ mind makes anything we do yoga. Note, I am not saying that “Yoga is whatever we say it is.” I am saying that what we do can become a yoga practice. This is most emphasized, perhaps, in the zen buddhist yoga traditions where gardening, cooking, eating, shitting and sitting are all integrated as practice. But such a view has it’s roots in the Pali Canon’s Satipatthana-sutta where the Buddha gives the instruction to practice sati while doing any and all of our ‘mundane’ daily experiences:

When Yoga Journal asked me seven years ago what my practice consisted of, I included the then new practice of changing diapers as my daughter had just been born, and I was not being flippant. My zen training prepared me for seeing the possibility of breaking through to liberating insight through any non-harming activity. A gatha written by Thich Nhat Hanh for using the toilet, alluding to the Prajnaparamita Hridaya Sutra states:

Defiled or immaculate,
Increasing or decreasing –
These concepts exist only in our minds.
The reality of interbeing is unsurpassed.

Yoga started out as conceptualized as the yoking of the unruly mind. It was so for the shramanas whose teachings were ultimately written down in the Upanishads. It was so for the writer of The Bhagavad-Gita. It was so for the Buddha and it was so for Patanjali. Like the “dim-witted” monk in the story, if we yoke our mind to the sweeping of our home’s floors, we are practicing yoga. And we may find ourselves, as my teacher, Samu Sunim would say, ‘immediately, intimately, spontaneously, and obviously’ awake! 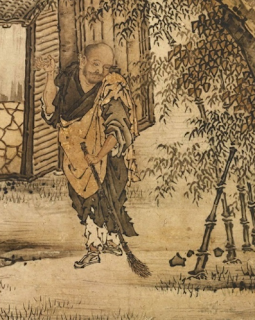